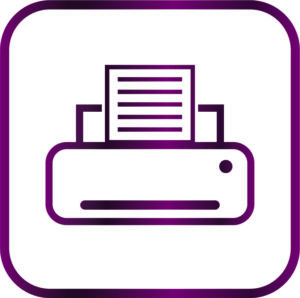 I have no idea how many printers I have owned since I got my first dot matrix for Christmas in the early 1990s. It was a slow, noisy machine that could be made to print at near laser printer quality with the right software. When I sent a print job, I had plenty of time to make a pot of coffee.

Back in those days, if you wanted to print something, you were forced to use the computer connected to the printer. Some simple printers today may still force you to print with a cable, but most printers now have a convenient wireless option. Once your computer is connected to the wireless router, such as ITC Blast Wi-Fi, you can print from anywhere you have wireless Internet coverage. In many cases, new printers allow you to print pictures and documents from your computer, tablet, and even your smartphone.

Another important consideration is whether you need an inkjet or laser printer. Inkjet printers are typically slower than laser printers and are more expensive to operate. The benefit is they are much cheaper to buy initially, and they usually excel at printing photos. The most significant expense with inkjet printers is having to purchase expensive ink cartridges. When I first used an inkjet printer, I would typically refill the cartridge from bottles of ink. Unfortunately, that doesn’t work these days because, in many cases, printer manufacturers have mechanisms that prevent the refilled cartridge from working in the printer it came out of.

Some brands of inkjet printers make models with ink tanks where you can put a bottle of printer ink. This is cheaper when compared to a cartridge. They generally cost more to initially purchase than their cartridge equivalents but are cheaper to operate. I can say as an owner of one of these types of printers, I would personally never purchase a cartridge printer again.

The laser printer is typically good for documents, as they produce nice crisp text. For this reason, they are more appropriate in an office setting. The advantage is that they print very fast and are cheaper to operate than a traditional inkjet with an ink cartridge.

Laser printers also struggle with different paper types, such as labels, envelopes, and greeting cards. There are more expensive laser printers that handle these paper types and print nice photos, but they are on the expensive end of the printer lineup.

Whichever you decide you want, inkjet or laser, you can find models that perform just the basic printer function that my old dot matrix did. Many people want more out of their printer and tend to gravitate toward an all-in-one model that features a built-in photocopier, flatbed scanner, and sometimes a fax machine. Some models will even sort the output for stapling. I have not seen one that makes coffee yet, though.